Peter Murphy (SeaBright Productions) is an independent Nova Scotian filmmaker who has produced 10 nationally broadcast films on traditional Celtic Music/Culture and numerous short docs and videos on a variety of local subjects from his home on the shores of St. Georges Bay, near Antigonish, Nova Scotia.

Peter Murphy (SeaBright Productions) is an independent Nova Scotian filmmaker who has produced 10 nationally broadcast films on traditional Celtic Music/Culture and numerous short docs and videos on a variety of local subjects from his home on the shores of St. Georges Bay, near Antigonish, Nova Scotia.

In the mid 90ies I decided to get into moving pictures. Took a summer school course in video at the NS Art College. Set up SeBright Productions, producing any video work I could get in the area – tourism, industrial what ever. Quickly realising there wasn’t enough video work so I started making my own documentaries on what I liked best about eastern NS and Cape Breton – traditional music, landscaper and the people. It stared with a documentary on “the Master of the Cape Breton Fuddle, Buddy MacMaster”, which ended on broadcast nationally on CBC, Bravo and the Knowledge Network. I continued making films on local and international traditional Celtic culture and music, and managed to maintained my independence by deriving income from sales of programs to broadcasters and DVDs, that is till recently when the bottom fell out of both markets.

Growing up in Antigonish area I bumbled around at school. Travelled the country not having a clue of what to do. One summer when I came home a friend offered me a job on his local weekly newspaper…he handed me an army surplus camera…I suddenly had found what I wanted to do. Finding out later in life I had a touch of dyslexia or whatever, which may have accounted for my love of the visual world. I spent hour photographing. learned to develop film and print photos. I had numerous exhibitions a Canada Council Grant to film rural life in Nova Scotia.

I eventually got very interested in historical photographic processes which led me to the Mecca of photography, Rochester NY, home of Kodak and the Visual Studies Workshop where I spent time learning about the various early methods of photography. I feel in love with the photogravure process and started producing images in one of the earliest printing method which is closely related to the classic method of etching. 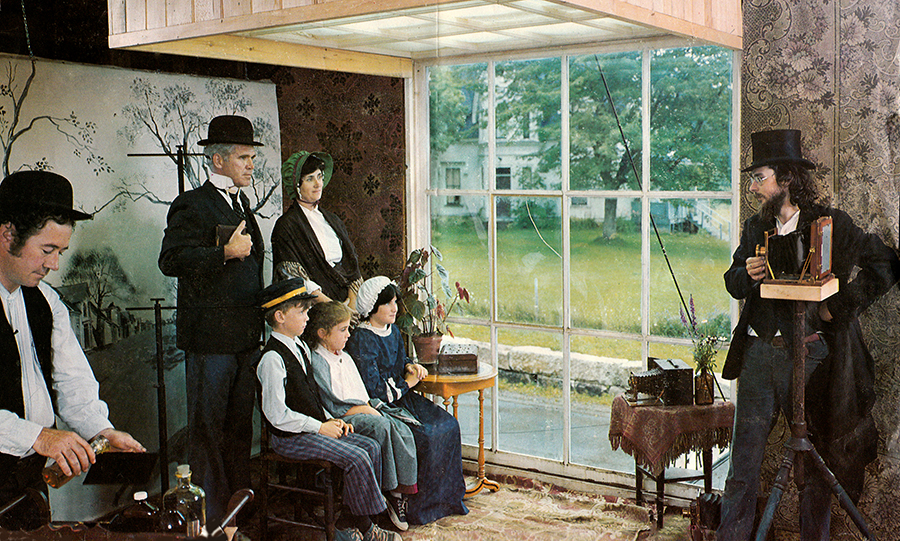 
Along with my photographer friend Archie MacLellan we created an authentic 1860’s Tintype Studio. We were the only in Canada- and only the second in North America using the original wet plate collodion process. The studio is still running in the historic recreated village of Sherbrooke, Nova Scotia.

For the past few years my brother Chris and I have been travelling Nova Scotia interviewing “Back to the Land” who came to Nova Scotia in the early 70’s for a book and documentary film on this largely overlooked immagration movement that changed our province.

Chris Murphy, recently retires sociologist is well into completing the first draft of the book while work I continues on the documentary film.

Soon I will be posting some of the slightly edited interviews we filmed over the past two or more years.

for Peter Murphy or SeaBright Productions